What is a typical day in the life of a fisherman?

What are the daily challenges that fishermen face to bring us our seafood? David Stevens, a Cornish fisherman, tells us about a typical day for him.

What does being a fisherman involve?

David is the skipper of fishing vessel The Crystal Sea, a 20m trawler working in the South Western approaches where the Atlantic Ocean meets the rugged Cornish coast – going out for three to five days at a time. The vessel catches a mix of demersal fish, mainly haddock, lemon sole, monk fish, brill, red gurnard and John Dory.

The Crystal Sea is a family-run business in Cornwall. The family originate from St. Ives and have been fishermen for many generations, although they now work out of Newlyn. The fishing vessel is skippered by two brothers, David and Alec Stevens, with a crew of three others and their father helping with the nets and supplies ashore.

The business is part of the Responsible Fishing Scheme (RFS), an independent, audited assessment of the application of good practice by a vessel skipper and crew. The RFS was developed to raise standards in the catching sector, enabling those within the seafood supply chain to demonstrate their commitment to the responsible sourcing of seafood. The certification label is designed for businesses sourcing direct from fishing boats, so they can rest assured the fish they buy come from a vessel that participates in the scheme. RFS covers environmental awareness, care of the catch, crew competence and vessel standards.

David and the crew of The Crystal Sea also participate in KIMO’s Fishing for Litter scheme: an initiative that aims to reduce marine litter by involving the fishing industry. Fishers collect marine litter that is caught in their fishing gear instead of throwing it back into the sea and deposit it safely in special bags at the quayside which are then disposed of.

Recently, David even appeared in a film, The Business of Fishing, talking about the economics of fishing.

What is a day in the life of a fisherman like?

This excerpt is taken from a blog, written by David:

“It’s the early hours of a spring morning and as the rest of the world sleeps, we fire up the engine, switch on the navigation lights and let the ropes go from the quay. As we pass the pier head the crew stow the ropes, check the gear one last time, as we slip into the darkness to start another day’s work.
As they say on land, the early bird catches the worm, and it is true that to get the best catch of the day you need an early start.

There is method to our early morning madness. Today we are after John Dories; they are a predator fish and, having larger eyes than their prey, they can catch their quarry more easily in the dawning half light as the fish make their way down to the seabed to feed. So shooting our nets before dawn is a must, giving us the best chance to get a good catch.

We steam for about 2 hours to a place we know well and have had luck in catching the Dories in the past. The Dories like a bit of tide in the water, so the place we have chosen to shoot our nets has a strong current flowing today as it is a spring tide.

It’s just after 5am and the light is starting to come into the sky from the East, the gulls that have followed us from the shore are getting excited by the shooting of our nets. The crew check the cod ends are tied up correctly and we stream the gear away, then shoot our trawl doors and pay out the right amount of warp for the depth of water and commence our first tow of the day.

We tow for about four hours with one man out of a four-man crew taking the watch, whilst the rest of the crew head below to catch a few hours’ sleep before we haul our nets.

As soon as my head touches the pillow it seems I am woken again and it’s time to haul. We all have a cuppa then we put on our oil skins and haul the nets.

It’s always quite exciting when we bring the nets to the surface. We wonder if our hunting instincts are correct today and we have a good catch or not.

We bring the nets to the boat and leave them just on the stern of the boat and then we slowly come round in a circle and take the cod ends one at a time, the gulls are squawking loudly now as the cod ends come to the side of the boat; this is always a good sign – the louder they are quite often the better the catch – and today they are reassuringly noisy and messy!

Today’s catch is quite good with a good few Dories and a good mix of other fish amongst the catch, so we quickly go about shooting our gear again.

With the gear shot again, the crew and I set about dealing with the catch; we sort the catch and gut the fish.
At this point the seagulls are very happy gobbling up all the guts from the fish we throw over. Then the fish is well washed and sent down to our hold where it is placed in boxes on top of a layer of ice, then we ice the top of the box. It is important to chill the fish as quickly as possible so that it maintains that fresh-from-the-sea look.

All of this work is recorded by CCTV cameras and viewed by scientists when we get in, so they have full confidence that we are not discarding any fish back into the sea. It also gives the fishery scientists a really good idea of the health of the stocks. For these reasons, we are happy to carry the cameras on our vessel.
We repeat this process six more times on our 36 hour trip. We do have things go wrong at times; we work in an area that saw a lot of shipping sunk in both the world wars and we quite often pull up debris from the old wrecks, we also catch stones at times which can be quite a menace to our nets.

We don’t just sort fish from our catch either, we also collect any rubbish that we trawl, mainly plastic bottles and bags, and any amount of litter strewn over by merchant boats and by bad habits ashore. All this litter is put into our Fishing for Litter bags and we put it in skip provided ashore when we return from our trip.” 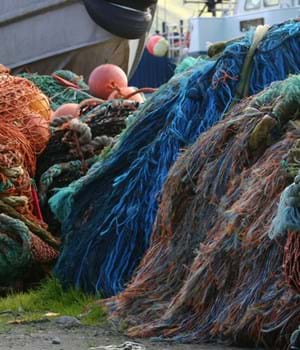 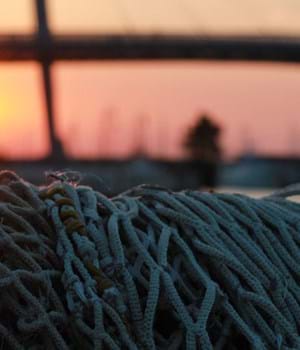 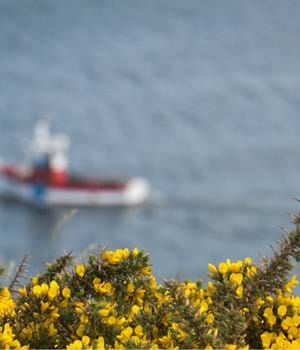 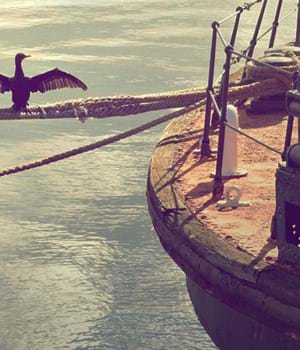